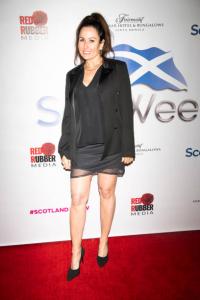 LOS ANGELES, CA, USA, May 3, 2021 /EINPresswire.com/ — During this past year of Covid, many executives and companies in Hollywood have had to pivot to keep their companies afloat. The Hollywood industry, like the people who run it, are very resilient and adapt to change quickly. Keri Ann Kimball and Lorenzo Doumani were set to make a film, “Lady in the Attic”, just before COVID, under the umbrella of Totally Independent Films (https://totallyindependent.com/). We have pushed the film start date many times but will now be casting in the summer and shooting in the fall of 2021.

In the meantime, Keri Ann Kimball is currently heading business and creative development for TAP STUDIOS—a Creative Branding Agency in Hollywood (https://taplosangeles.com/)—and has a few animation projects in development and production. The most exciting franchise animation in the works is HAIBU (https://haibu.love/); an entertainment franchise of books, tv shows, films, and games—invoking thought and positive change worldwide. Our purpose is to educate posterity on global efforts for wildlife conservation. By providing next-generation content and engaging platforms, we can entertain and assist children in becoming contributing leaders of their communities. HAIBU is a next generation approach to animation based on a little girl who travels the world saving animals. We partnered with an important non-profit, WILD AID (https://wildaid.org/), in this animation franchise to ensure that we make an impact and change the world to stop wildlife cruelty.

Keri Ann Kimball enjoys primarily working with undiscovered artists and projects based on real life stories. She has been very fortunate in obtaining the “Life Rights'' to very interesting and unique stories such as: “The First Five”, a TV series loosely based on Kathryn Childers, one of the first five women allowed into the United States Secret Service; Michael X, who was influential in the black rights movement in London; and a real-life story of a woman caught up in the Mexican cartel. In the past Keri Ann has worked on projects about the legendary Robert Evans; and the world’s first “It Girl,'' Evelyn Nesbit (“American Eve”).

Keri Ann Kimball was born in San Francisco and trained at San Francisco's renowned ACT and then went on to study at Tisch School of Arts at New York University in Theatre and Film. She came to Hollywood in her 20’s and appeared in both film and national television productions. She later produced and helped cast 5 successful motion pictures, starring Oscar winning actress, Marisa Tomei and Oscar nominated and Emmy winning actor Thomas Haden Church. Kimball Entertainment currently manages writers, directors and artists including fine painters and musicians.

Kimball Entertainment looks forward to a success 2021 with all of it's projects.
Send submissions to: asst@KimballEntertainment.com