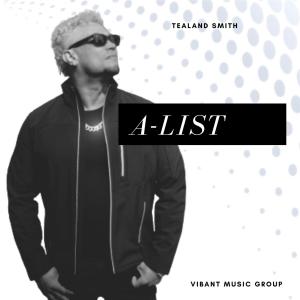 ATLANTA, GEORGIA, UNITED STATES, May 3, 2021 /EINPresswire.com/ — When the topic of the great voices that define a generation, who comes to mind? There are but a handful over the years, but what they all possess is the ability to dazzle listeners with a one-of-a-kind sound that makes them instantly recognizable to fans around the world. Atlanta-based singer-songwriter Tealand Smith is a melodic marvel whose buttery voice has harnessed international respect, cultivating a solid fan base of dedicated fans from across the globe.

As part of his 2021 initiative to release a new single every 60 days, Tealand Smith is proud to announce the release of his latest single “A-List” come May 7th, available on all major streaming platforms.

Tealand’s poetic songs and buttery smooth voice have allowed him to work with some of the world’s top producers, including Grammy Award-Winning Producer Dave Cobb. Through working with Cobb, Tealand’s work went viral in Japan, when his hit song “Something About the Kiss” was featured on several soundtracks of feature films; sparking the beginning of his global brand.

Running with the momentum of his previous work, and the dedication of his international fanbase, Tealand has made a commitment to release a new song every 60 days, beginning with “A-List”.

“I love what I do, I plan on being here for a while. I have an unlimited amount of music that I plan on releasing.”

Through proof of concept, dedication to the craft, and unwavering commitment to his fans; Tealand Smith’s purpose-driven vision is coming to fruition with the release of “A-List”.

Tealand Smith (T.Smith) is an American singer and songwriter based in Atlanta, Georgia. Known internationally for his captivating melodic style, Tealand Smith began his musical career at the young age of five, singing in his grandfather’s church choir. As Tealand got older, he continued to sing in the church choir and chorus through high school, before moving on to pursue music professionally. Shortly after graduating, Tealand signed on with Dallas Austin’s Rowdy Artista Records where he would record his first studio album, produced by Grammy Award-winning producer Dave Cobb. Tealand wrote and performed several songs with music Producer Dave Cobb and he landed songs on several movie soundtracks along with writing a hit single in Japan Produced by Dallas Austin called “Something About the Kiss”.