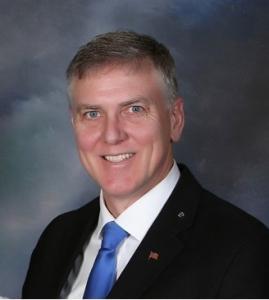 WASHINGTON, D.C., UNITED STATES, April 22, 2021 /EINPresswire.com/ — James Marter has made it official, filing with the FEC as a candidate for Congress in IL 16. Over the weekend, Marter spoke at a large LaSalle County Reagan Day Dinner and is calling for Adam Kinzinger to resign for dereliction of duty as a Republican Congressman.

"Adam can't resist spending our tax dollars and voted for every 'Omnibus' bill during his over a decade in Congress. He supports radical gun control, attacks elected members of his party, and has taken on new roles as 'PACman' and media darling for the #FakeNews. He's been waging war on Republicans since before I challenged him in 2018. He claimed to be a conservative, but has governed like a radical leftist. The people of Illinois' 16th District have had enough. With the dangerous, single-party rule in Washington, we can't afford to elect someone more likely to attack the people of his district than represent them. That's why I'm all in, to take care of unfinished business," says Marter.

Many Illinois Republican organizations voted to censure Kinzinger, including Will, LaSalle, and Iroquois Counties, with DeKalb County issuing a strong rebuke of his actions.

Marter's grassroots supporters know his record is second to none when it comes to working alongside people and organizations fighting to protect our God-given, constitutionally enshrined rights: LIFE, the right to keep and bear arms, religious liberty and all the freedoms and opportunities Americans want to preserve for future generations.

"Adam's too busy attacking Republicans and raking in cash for the PAC he resurrected from John McCain, to be concerned about counties in Illinois that cast more ballots than they had registered voters. He regularly shows disdain for institutions my fellow Republicans and I hold dear, criticizing churches and characterizing military vets as prone to radicalization. He has labeled 75 million Trump voters as tribalistic, implied Senator Johnson (R-WI) is a racist and was left of Nancy Pelosi in calling for the resignations of Republicans over unproven allegations. His own family said in writing they were embarrassed by him. He even went so far as to accuse a GOP women's group of having 'broken' politics, merely for believing that Republicans should be afforded due process. Basically, Adam's toxic and finished. I'm going to bring representation back to IL 16. Join the fight at Marter4Congress.US."