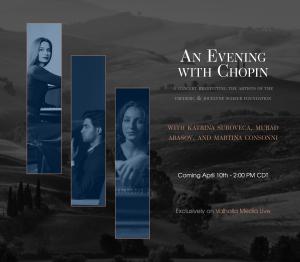 BOZEMAN, MONTANA, USA, April 17, 2021 /EINPresswire.com/ — Due to overwhelming demand, the Frederic & Jocelyne Scheer Foundation announced today that it would be extending the streaming period of An Evening with Chopin, a concert dedicated to showcasing the talents of young pianists from around the world. The concert, previously only available until April 17, will now be streaming for an additional week, until April 24, exclusively on Valhalla Media Live.
Filmed in Latvia, Germany, and Italy, three rising stars participate in this Chopin-centric program hosted from Australia by Madeline Cross Parkin, the foundation’s Director of Grants (Brisbane, Australia). Audiences will hear from Katrina Suroveca (Riga, Latvia), Murad Abasov (Berlin, Germany), and Martina Consonni (Como, Italy) in the 60 minute concert stream. The repertoire ranges from Chopin classics to rarely heard gems.
Valhalla Media Live and its team were tasked with spearheading the filming logistics and post-production of the multi-country offering, aiming to fulfill their mission of bringing world class artistry to viewers around the world. The stream is viewable on any device and will remain available for 72 hours after initial purchase.
Tickets are $8.95/student suggested price & $14.95/adult suggested price and available for purchase at valhallamedia.live, however a pay what you want option is enabled for this concert.
“The world of music is international and does not know borders. Music brings peace and joy around the world.” – The Frederic & Jocelyne Scheer Foundation

About the Scheer Foundation
The Frederic & Jocelyne Scheer Foundation (“Scheer Foundation”) is a US Private Foundation (501-c 3) dedicated to fight malnutrition and children mortality in Africa in promoting local agricultural and industrial project to build up local and regional employment. The Foundation recently expanded its reach to Arts & Music in 2020 and is sponsoring young promising artists around the world. Learn more at www.scheerfoundation.org

About Valhalla Media
Re-energizing the world of classical music in a new digital realm, Valhalla Media is committed to providing online performing arts content that features fresh and creative programming, while helping artists and arts organizations re-imagine the ways in which they can broaden and connect with their audiences. Together, working directly with artists and producing organizations, Valhalla Media will elevate its colleagues and help them thrive on the stage of the 21st Century. Learn more at valhallamedia.live