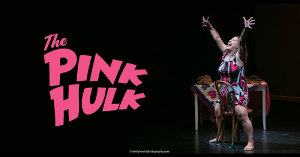 Valerie David is The Pink Hulk 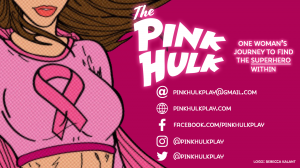 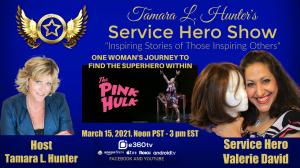 My show is not just about fighting cancer; it has an universal message of hope and empowerment.”
— Valerie David

WINCHESTER, CALIFORNIA, UNITED STATES, March 19, 2021 /EINPresswire.com/ — The Service Hero Show, Hosted by Tamara L. Hunter, is proud to announce that Service Hero, Valerie David, will be performing segments from her one-woman show, "The Pink Hulk: One Woman's Journey to Find the Superhero Within" on Saturday, March 20, 2021, at 4 pm PDT (7 pm EDT).

On Monday, March 15, 2021, Tamara L. Hunter honored Valerie David as a Service Hero. The show highlighted how Valerie serves to bring awareness, humor, and hope to many who are facing cancer. A cancer survivor herself, Tamara L. Hunter, feels it is essential to support those who are out on the front lines in making a difference.

“Valerie’s journey on stage can barely be called "acting" because of how genuine it is – as though a light emanates from her very soul to make both her and her performance glow. Watching Valerie David perform The Pink Hulk: One Woman's Journey to Find the Superhero Within is something so rare and so marvelous; it is the most powerful and poignant two hours I have ever spent at a theater. Her performance is life-changing…and we should all be a little grateful that there are people like Valerie David to lighten the way…” – Kristen Morale, Broadway World, October 2019, NYC

Saturday, March 20, 2021, Valerie David has been asked back to "The WHAM! Festival for Women's History Month.

The Pink Hulk:
One Woman’s Journey to Find the Superhero Within

Includes excerpts from The Pink Hulk with talkback and audience Q&A to follow, including special healthcare guest.

(New York – March 9, 2021) – In honor of Women’s History Month, the WHAM Festival presents the critically and internationally acclaimed comedic solo show The Pink Hulk: One Woman’s Journey to Find the Superhero Within, written, performed, and co-produced by three-time cancer survivor Valerie David. Directed by Padraic Lillis and Maris Heller, excerpts of The Pink Hulk will be virtually live-streamed on Saturday, March 20, 2021, from 7:00 pm to 8:30 pm, with a talkback and audience Q&A to follow. Ticket buyers will receive a Zoom join link on the day of the show.

The Pink Hulk has been invited back to WHAM for a third year in a row, performing a surprise new ending each time!

Now battling breast cancer after fighting off lymphoma, Valerie does something most people facing cancer in their life probably wouldn't think of doing. With a fear that she might lose “the girls”, she takes them out for one last hurrah. And does Valerie succeed? Is there a "happy" ending? Come see the show to find out! This sexy, adventurous solo show follows Valerie's journey to seek her own "hulk-like" strength to find her superhero within to become a 3-time cancer survivor. An empowering and true story of inspiration for anyone facing ANY adversity in their own lives! With plenty of humor—guaranteed!

Valerie “hulked out” on cancer after her first two bouts with it—Non-Hodgkin’s Lymphoma in 1999 and then breast cancer in 2014/2015. Then in September 2018, Valerie was re-diagnosed with breast cancer—this time Stage IV metastatic. As of April 2019, she has beaten cancer again and has continued to beat it! Valerie has not stopped performing throughout this pandemic, continuing to inspire audiences performing virtually, both domestically and internationally with audience talkbacks to follow.

Valerie reactivated her superhero within, and exactly five months after receiving oral medication—no surgery, no radiation, no chemotherapy, Valerie no longer has active disease. There is no trace of her cancer! Her solo play is a celebration of being comfortable in one’s own skin, of embracing and accepting one’s own body—no matter its shape or size. Her vision is funny, raw, emotional and inspiring. The Pink Hulk is a true testament to the power of our own inner superheroes within to fight back any adversity in life—to never give up and always have hope!

“My show is not just about fighting cancer; it has a universal message of hope and empowerment,” Valerie said.

The Pink Hulk has been accepted into 38 play festivals since its 2016 debut, performing worldwide including in England, Sweden and Finland, garnering rave reviews and winning several awards.

The Pink Hulk is presented by the WHAM Festival.

Valerie David (playwright/performer/co-producer) wrote the autobiographical, comedic drama The Pink Hulk as a cancer survivor to express the empowerment she felt being able to find humor and superhero inner strength going through three bouts of cancer. It is Valerie’s award-winning, internationally acclaimed, inspirational solo show that chronicles her journey to become a 3-time cancer survivor—first Non-Hodgkin’s Lymphoma (1999), Stage II Breast Cancer (2014-2015) and then Stage IV Metastatic Breast cancer (2018-2019), which she has conquered. Valerie is a true superhero—she currently has no evidence of disease—no trace of her cancer as of April 2019. The Pink Hulk has been accepted into 38 different play festivals worldwide since its 2016 debut and is a testament TO NEVER GIVE UP! It has won several awards including the Audience Choice Award in the Shenandoah Fringe and WOW Award in Sweden’s Gothenburg Fringe, and Valerie has been touring the show since 2016. Valerie and The Pink Hulk have been featured on TV, radio, in publications and on podcasts, including NBC 4 New York, CBS, FOX, amNY, Heal magazine, The IndyStar, Breast Friends Cancer Support Radio Network, Mia’s World, First Online with Fran, The Crisis Help Show, and Reykjavik Fringe Festival podcast. Valerie is a member of the Solo Arts Heal collective, where a group of artists perform their solo shows as inspiration and empowerment; and also Broadway Hearts, where she is part of the Broadway community performing weekly virtual singalongs at children’s hospitals nationwide to bring smiles and joy to children in need. Valerie is also an improviser, writer, editor and motivational speaker. A graduate of the American Academy of Dramatic Arts-Manhattan Campus and James Madison University, her credits include the Off-Broadway production of A Stoop on Orchard Street, Cookie in Rumors and Claudia Shear’s Blown Sideways Through Life. Films: How I Became that Jewish Guy and Bridges and Tunnels. As a marathon cyclist, she cofounded Cycle of Hope, which raises money for national and international cancer organizations through bike marathons. Valerie has also co-written several two-person plays and cabarets. Memberships include the Dramatists Guild, TRU, AEA and SAG-AFTRA. She also performed improv throughout New York City with improv groups Faceplant, Cronuts and Cherub. With more than 20 years of experience as a writer and an editor, she also teaches improv and writing classes across the country and worldwide. Valerie is a published writer, including in the MSK Visible Ink Writing Program Anthologies, Cure Today, Broadway World, and her poem, The Coronavirus & Metastatic Cancer Spoken Word Poetry, was published in The Collection by Open Doors NYC. Valerie raises money through The Pink Hulk performances for domestic and international cancer organizations. Valerie wishes to thank the WHAM Festival and the WHAM team—this is her third time performing in this amazing festival. She is currently developing her new solo show Baggage from BaghDAD about her father and his family fleeing Iraq in 1941 from religious persecution—and how their survival shaped who she is today. Valerie will be performing a reading of Baggage from BaghDAD in May 2021, as part of Emerging Artists Theatre’s Spring New Works Series. For more info on Valerie and her show, visit https://pinkhulkplay.com/
Padraic Lillis (director) is the founding Artistic Director of The Farm Theater. He was awarded Best Direction of a Solo Show for Valerie's The Pink Hulk solo show at Planet Connections Theatre Festivity. Padraic has also been awarded the NY IT Award for Outstanding Director for Lindsay Joy's Rise and Fall of a Teenage Cyberqueen, Overall Excellence Award from NY International Fringe Festival for Lee Kaplan's Bully, Best Overall Production of a Solo Show and Planet Advocate Award for his solo show addressing suicide awareness Hope You Get To Eleven or What are we going to do about Sally?, and is a member of the Indie Theater Hall of Fame. He is a member of the LAByrinth Theater Company and a lifelong Yankee fan.

In its fourth season, the Service Hero Show shares, "Inspiring Stories of Those Inspiring Others." Tamara L. Hunter, the First Global Next Impactor and President and Co-founder of Chemo Buddies for Life (CB4L.org), has hosted and told over 500 inspiring stories of Service Heroes making a difference. The show airs every Monday, Wednesday, and Friday at Noon PST, 3 pm EST.

Valerie David, “The Pink Hulk: One Woman’s Journey to Find the Superhero Within” was Honored on the Service Hero Show Hosted by Tamara L. Hunter March 15, 2021