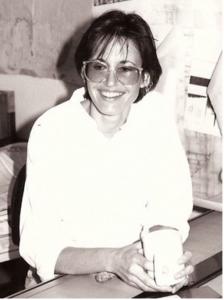 Martha Johnston, dynamic artist best known for her over 60 movie and television design credits, is set to receive the Art Directors Guild (ADG, IATSE Local 800) Set Designers & Model Makers Lifetime Achievement Award at the 25th Annual ADG Awards. The reimagined gala, set on Saturday, April 10, 2021, will break with tradition in response to the COVID-19 pandemic and will be presented on a virtual platform, streaming to a worldwide and more inclusive audience. The event will celebrate Johnston’s career designing for features, television shows (including the last season of Seinfeld with Tom Azzari), as well as theme park and backlot projects. This is the second of four Lifetime Achievement Awards to be announced by the Art Directors Guild. The event is free to everyone but registration is required at www.adgawards25.com. #iwillbethere #adgawards

“We are proud to honor Martha Johnston, whose commitment to the Set Designer and Model Maker craft has spanned four decades. For Martha, working with people who value family was a priority. She was able to work on challenging projects and still raise her three children, at times even bringing an infant to work with her. Her achievements are an inspiration to those who follow," said Kristen Davis, ADG Set Designers & Model Makers Council Chair.

Martha Johnston was following in her father’s footsteps when she took a job after studying for three years at CSUN to work on Comes a Horseman where her father was set designer. While still studying at night, she found work on TV shows “Quincy, M.E.” and “Little Women” at Universal. In her 40-year career she has also worked at Warner Bros. and MGM. Her additional numerous television credits include programs such as “Generation,” “Hill Street Blues” and “Seinfeld,” as well as the occasional theme park and backlot work in set design and model making.

Johnston’s more than 60 feature credits are equally prestigious and include The Main Event, Xanadu, Pennies from Heaven and Poltergeis. Her additional blockbuster features include Air Force One, The Perfect Storm, The Dark Knight Rises, Interstellar, Dunkirk, Dawn of the Planet of the Apes, Planet of the Apes 3, Aquaman, Last Samurai, The Terminal, Star Trek Nemesis, The Call of the Wild, The Story of Us, Elizabethtown, Psycho ll, two of the Back to the Future films and Tenet.

As previously announced, Ryan Murphy, one of television’s busiest and most successful writers-directors-producers whose shows have consistently reflected the highest quality of production design, will receive the esteemed Cinematic Imagery Award. ADG Lifetime Achievement Awards are presented to outstanding individuals in each of the guild’s four crafts. Academy Award® and Emmy®-winning Production Designer Stuart Wurtzel, best known for his work on Hannah and Her Sisters and Angels in America, will receive the ADG Lifetime Achievement Award from the Production Designers and Art Directors Council (AD). The ADG Lifetime Achievement Awards honorees from the Scenic, Title & Graphic Artists (STG), and the Illustrators & Matte Artists (IMA) will be announced shortly. A complete list of past honorees can be found on ADG’s website.

Producer of this year's ADG Awards (#ADGawards) is Production Designer Scott Moses, ADG. Final online voting will be held through April 7, 2021, and winners will be announced at the virtual gala ceremony on Saturday, April 10, 2021. ADG Awards are open only to productions when made within the U.S. by producers signatory to the IATSE agreement. Foreign entries are acceptable without restrictions. Further inquiries regarding the ADG Awards may be directed to ADG Awards & Events Director Debbie Patton at (818)762-9995 or email Debbie@adg.org.