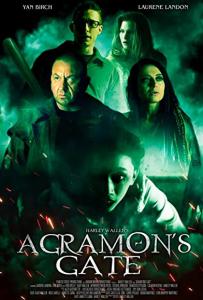 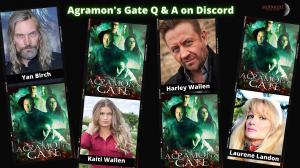 Agramon's Gate is simply a haunting film, the kind that stays with you long after it's over. I always love a good ghost story.”
— Darrin Ramage

LOS ANGELES, CALIFORNIA, USA, March 17, 2021 /EINPresswire.com/ — Keep your ouija boards in your closets, folks, because something wicked is on the loose in Harley Wallen's suspenseful horror thriller, Agramon's Gate, set for a one-time only screening at Dead In Decatur's streaming event happening March 20 on Twitch.

In Agramon's Gate, a routine seance goes haywire, unleashing the unstoppable power of Agramon, an unhinged spirit that has taken the form of the departed father of our protagonist, Richie (Kris Reilly), who killed his father in self-defense when he was still a boy. Together, with the help of Richie's friends and a couple of psychic mediums, a final showdown is in the cards that will either result in defeat of Agramon, or the damnation of all souls involved.

"I really tried to merge a great story, characters with suspense and scares, and at the same time go all the way to a chuckle between scares"
~ Harley Wallen (writer/director)

Agramon's Gate has accumulated a litany of awards during its festival run including Best Feature at the Eclipse Awards and Best Thriller at the Bloodstained Indie Film Festival. During this time, the film was picked up for distribution by Midnight Releasing and is now available on VOD.

Death In Decatur's screening of Agramon's Gate will be preceded by a series of shorts by additional indie filmmakers. For more information, be sure to check out the event listing on Facebook by clicking HERE

You can also go to Dead In Decatur's Twitch channel to enjoy the show directly when it starts streaming on March 20 at 7 pm CST. This event is free, so gather up some friends and let the thrills and chills of Agramon's Gate commence.

Attention bloggers, online film and entertainment magazines, podcasters, and freelance writers, for follow up interviews with the cast and crew, be sure to contact Sharry Flaherty of Samera Entertainment at: SameraEntertainment@Gmail.com or AcortAcquistions@Gmail.com

ABOUT MIDNIGHT RELEASING
Founded in 2009 by Darrin Ramage, Midnight Releasing is a premiere home entertainment distributor of quality independent genre films released only in the North America Region. With a following of thousands on social media outlets, Midnight Releasing continues to draw attention with each release.

ABOUT PAINTED CREEK PRODUCTIONS
Painted Creek Productions is a independent production company founded 2017 by Harley Wallen and Kaiti Wallen with several films such as Betrayed, Abstruse, Eternal Code and coming in 2021 the highly anticipated Ash and Bone.

ABOUT SAMERA ENTERTAINMENT
Sharry Flaherty CEO and Founder of Samera Entertainment is a seasoned and well known film producer and Acquisitions Executive for Midnight Releasing. Samera consults with filmmakers on their projects that are either in development, pre-production or post-production. Filmmakers are welcome to submit their horror and thriller titles to:
SameraEntertainment@Gmail.com or AcortAcquistions@Gmail.com