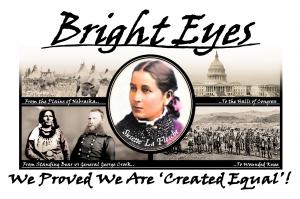 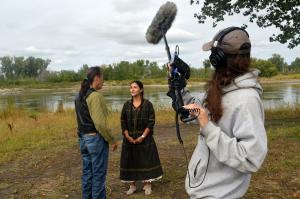 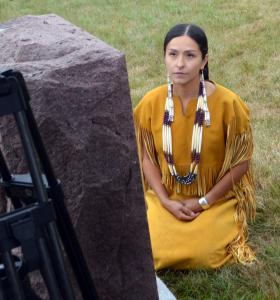 We believe the true story of a young minority woman, her fight for justice, and how she helped make this world a better place is very timely and inspirational.”
— Jerry Thompson

Bright Eyes came to the aid of Chief Standing Bear of the Ponca Tribe of Nebraska in 1879, resulting in the landmark court case of Standing Bear vs. General George Crook, in which an American Indian was first regarded as a “person” with constitutional rights.

After the trial, Bright Eyes spoke on behalf of all Native Americans and drew large crowds in Philadelphia, Boston, New York and Washington D.C. In Boston she was befriended by poet Henry Wadsworth Longfellow and Louisa May Alcott (Little Women author). Bright Eyes was the FIRST WOMAN ever allowed to speak at Boston’s Faneuil Hall, known as the “Cradle of Liberty.” She went on to lobby Congress for justice for Native Americans, and met with President Rutherford B. Hayes, to explain to him what needed to be done for Native Americans.

Later, Bright Eyes and her husband were sent by the Omaha Herald in 1890 as reporters to Wounded Knee before the massacre, and helped the wounded and dying while there.

The stage has now been set to produce a film depicting this incredible story of a meek, but strong young Native American woman. The Omaha Tribe has approved the land to create an authentic village to be used in the movie, and afterwards to be used as a tourist attraction for the Omaha Tribe. One of the foremost Native experts in the United States, Michael Bad Hand, who has worked on over 30 Native films, is committed to working to see that the Native culture including costumes, native homes, customs, props, hunting scenes etc. are portrayed authentically.

In addition, former Miss Native America (2013), Sarah Ortegon, has been chosen to play the lead role of Bright Eyes, and Native actor Anthony Parker, who grew up on the Omaha Reservation, is committed to playing Chief Iron Eye.

The foundation has been laid to begin the “Bright Eyes” movie, but Pathway Films is now seeking the needed funding in order to start filming. Thompson and many tribal leaders believe utilizing the crowd funding tool Indiegogo is most appealing.

“We would not turn down individual investors, but the beauty of Indiegogo is the grass roots nature of it,” said Thompson. “Every person who pledges money receives a t-shirt, posters, DVDs, and other rewards. For higher level pledges a role as an extra, tickets to the premieres, or even renting a theater for an exclusive showing with selected guests is available. When the goal is reached and the movie is released for national and international distribution, at least 50% of the profits will go to current pressing Native American needs.”

“We believe the true story of a young minority woman, her fight for justice, and how she helped make this world a better place is very timely and inspirational,” Thompson said. “We think “Bright Eyes” will attract not only a large Native audience, but audiences of all ethnicities and ages since it is also a story of how both whites and Natives joined forces to bring justice to Native Americans. We just hope that many thousands will catch the “Bright Eyes” vision and make their Indiegogo pledge so this movie can be made this year.”

To schedule interviews with the producer and actors please contact Jerry E. Thompson at pathwayfilms17@gmail.com or call 541-221-3154.