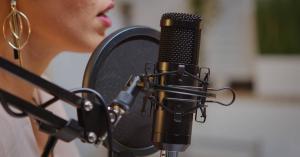 The Heyday of Audio Creators Has Come | Brybe.com

A New Firm Called Audio Collective Has Been Created To Help Build Businesses On The Clubhouse App. Read More About This New Trend From The Writers of Brybe.com!

LOS ANGELES, CALIFORNIA, USA, March 11, 2021 /EINPresswire.com/ — ​Audio creators are the latest kind of influencers, who were just recently born thanks to the extreme rise of the audio-only chat app called Clubhouse. Since the Clubhouse app is booming and the other social apps (e.g. Twitter) are participating in its success, these new content creators are joining forces to start working with big brands – and that is exactly how the Audio Collective has been created. The company, which has just recently announced its creation, will offer event planning, brand consulting, support, and community for creators working within this latest field. Its founders also plan to lobby Clubhouse for stronger moderation policies, better insights and performance metrics, and monetization tools – which will definitely allow the platform to grow equally fast with other social media platforms. The firm’s 40 founding members are creators themselves – they all host talk shows, meet-ups, discussion groups, and other high-profile events while having many millions of followers. Unlike podcasters, who produce edited shows, they perform for a live, interactive audience – pretty much like streamers.

The Audio Collective’s work will build on Clubhouse’s internal Creator Pilot Program – which was announced in December and is aimed at promoting the app’s most active users – and it will also offer services that the platform does not currently provide – such as helping brands produce events and matching them with creators on Clubhouse.

The Clubhouse app is only one year old, yet it has been greatly developed over these past twelve months and – according to the analytics firm Apptopia – the app has been downloaded more than 4.7 million times since its introduction last April. The company raised more than $100 million in funding in January, placing its valuation at $1 billion, and in light of Clubhouse’s quick rise, companies like Twitter and Facebook are racing to replicate the success of its audio-only format on their own platforms. Industry experts see interactive audio as an exciting area that will produce a new wave of stars – and a whole new slate of considerations.

So far, the creators in the Audio Collective have worked with brands like Showtime, Milk Bar, and Cash App. Talent scouts, agents, and marketing executives are looking to Clubhouse to find undiscovered creators and opportunities. “We’ve been able to partner creators we met on Clubhouse immediately with Fortune 10 brands,” said Lindsay Fultz, senior vice president of partnerships at Whalar, an influencer marketing agency. What is more, according to Adam Davidson, the author of The Passion Economy, “Never before have so many brands, entrepreneurs, influencers, and regular folks had instant access to their most devoted audience. Like any transformational medium, it offers new opportunities, and new terrifying pitfalls, and requires a thoughtful, steady guide. The Audio Collective is exactly that guide.”

A buzz about the Clubhouse is really big, and there is plenty of different audio content creators who are sharing their incredibly positive insights. “Every single one of us is getting multiple requests from brands, agencies, studios, organizations,” says Francesca Hogi, 46, a creator in Los Angeles with over 323,000 followers on Clubhouse. “We’re getting approached by other creators who see we’re able to build community and innovate, and they want to partner with us.” On the other hand, the app still has some own problems – as Clubhouse continues to add millions of users by the month, it has contended with complaints about hate speech, harassment, and misinformation. “One of the things we’re committed to as a collective is to help set the tone of the Clubhouse community,” Ms. Hogi said. The group plans to push the company for thoughtful moderation and safety tools, but for now, it is in a quite problematic position.

It is all getting especially troublesome when you will consider that Audio Collective’s founding members produce all kinds of content – for example, Mir Harris produced a performance of the Disney musical “The Lion King” on Clubhouse, Leiti Hsu runs a popular dinner party variety show, and Kat Cole – a former business executive – hosts rooms focused on leadership. This variety requires the app to follow some strict policies and laws, but supposedly everything is under control. “We want people to have safe and good experiences on the platform and we continue to be the fiercest advocates for more better stronger trust and safety tools,” said Catherine Connors, 49, an audio creator from Los Angeles. Fortunately, creators from Audio Collective say they view themselves as part of a larger shift toward independent work, following in the footsteps of Instagram influencers, YouTubers, TikTok stars, and Twitch streamers. “We see ourselves as building onto the broader media and creator landscape,” Ms. Connors said. “Part of what we want to do is not just create a model of how audio can be transformed,” she adds, “but also make a push forward for a creator-driven culture so that this culture isn’t being shaped by the platforms and technologists, but the artists and creatives and talent.”

Moreover, some creators feel that the app is underselling them. When a person signs up for Clubhouse, they are prompted to follow the app’s suggested users; many of those users are investors in the app and their close associates – yet Audio Collective aims to help elevate these creative voices and has been made to fight with that feeling. One of the audio content creators, Farokh Sarmad, said other collaborative groups and collectives were popping up on Clubhouse – especially among younger users. “The same way Viners got together, and Instagrammers got together to grow and collaborate seven years ago, it’s happening behind the scenes on Clubhouse,” he adds. According to him, “We’re trying to build alliances together to dominate the app in a good way. Everything people see in the rooms is an outcome of what’s happened days before in the back channels. Everybody’s forming collab groups,” which is a really good sign for the company's further growth and development.

Audio content creators are still a novelty, but owners of influencer marketplaces like Brybe.com believe that they might be the future and claim to definitely pay their attention to them – aiming to allow all of their clients/brands to run their influencer marketing campaigns with them!
​