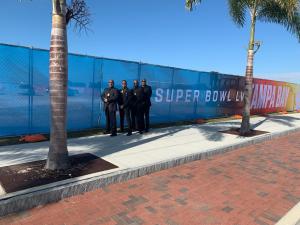 The compound which served as the command post for CBS Sports Security was designed by LDE Security and built to scale for Super Bowl LV week. LDE Security secured the CBS compound along with providing security agents in the Fan Experience locations across Tampa Bay. LDE Security also ensured that the NFL COVID-19 protocols were followed to guarantee safety for the public during the week-long activities around the Bay area.

Colonel Brown recently spoke to a local newspaper stating: “This was an opportunity for our company to show the world that we are equipped to secure the most delicate and intensive event at its highest level. It doesn’t get any bigger than the Super Bowl and we are proud that we were able to represent Tampa Bay in a positive way.”

LDE Security is led by Colonel Brown along with a team of highly trained prior federal marshals, law enforcement officers, special forces, and prior military personnel. As an SBE/MBE certified agency, LDE specializes in exceeding the physical security needs of their clients by providing the most highly trained security officers in the industry.