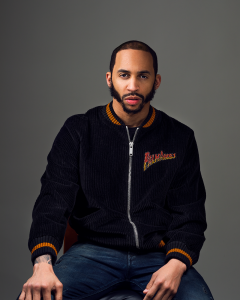 This book is just me putting everything on the table, and wanting my community to learn from it.”
— George Johnson

Most kids growing up in Northside Richmond, Virginia knew there were only three ways to “make it out” – balling, rapping, or selling drugs. George Johnson went another way. From starting a logo-sewing business in middle school, to playing professional basketball, to becoming a serial entrepreneur, George found himself at the helm of several businesses and multiple six-figure income streams by his early twenties. But along with lofty highs came many crushing lows—backstabbing family-members, future-crippling injuries, being indicted by the U.S. government … and even those weren’t the worst. As George came to learn, making it out is the easy part. Staying out… That’s the real struggle.

“There're many different dimensions to me; I’m an employer, I’m an uncle, I’m a son, I’m a father, I’m an entrepreneur…and no one group of people in my life knew everything I was going through,” George says. “This book is just me putting everything on the table, and wanting my community to learn from it.”

George’s story provides both an example and a means for many to rise above the challenges of the inner city, making Double Crossed a timely and vulnerable exploration of many universal struggles.

About the Author
George Johnson grew up in Northside Richmond where he spent most of his time either on the basketball court or figuring out ways to make money without selling drugs. He became a basketball standout in Virginia, and made a name for himself when he led Eastern Mennonite University to the Elite Eight of the DIII NCAA Tournament. Since then, he has built several businesses in various sectors and enjoys being a serial entrepreneur almost as much as he enjoys being able to support many of his family members and friends. But nothing has been more challenging than the struggles he faced with some of those family members and the federal government standing behind them. Now George spends his time in Houston Texas where several of his businesses are headquartered. He has three children—two girls and one boy—and enjoys his hard-earned life of freedom.