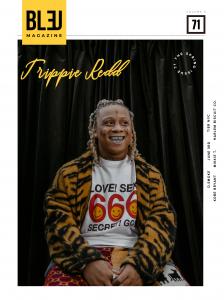 “We were fortunate to receive funding; Paying it forward to help support other Black owned businesses is the right thing to do. We want to help build ecosystems of success.”
— Devon Johnson, Editor-in-Chief

New York, NY — In honor of Black History Month and celebrating their 15 years in publishing Bleu Magazine will generously donate one million dollars in print advertising to Black-Owned businesses nationwide beginning the end of the month of February.

“We were fortunate to receive funding from LISC, LOWES, 100 Black Men, and actress/singer Janelle Monet during the pandemic. Paying it forward to help support other Black owned businesses is the right thing to do. We want to help build ecosystems of success,” says Devon Johnson, Editor-in-Chief of Bleu Magazine.

The giveaway includes a full year (8 issues) of advertising for 10 Black-owned businesses.

In addition to the big give-away the magazine launches their Spring Issue of Bleu Magazine starring Trippie Redd is available in stores on February 16, 2021. Click here to see cover posters from issue 71.

Trippie Redd is known for his unorthodox presence within the music industry. Between his outrageous fashion sense and genre-bending tracks, Trippie is nothing short of iconic.

In an interview with Bleu, the artist opens up about coping with death, which seems to be ever-present in the rap industry. He acknowledges his own experience within the rap community as someone who cannot be confined to one genre.. The 21-year-old chart topper tells us about his future collaborative projects with co-Ohio native, Machine Gun Kelly and Blink-182 drummer, Travis Barker.

Founded in 2005, Bleu Life Media represents Black culture and the people who make it what it is. We highlight the movers behind the movements you will hear about tomorrow, from the barbershop to the boardroom. Black culture is American culture.