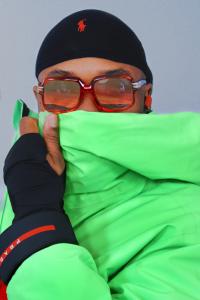 Maliks experience in the apparel Industry working with Fashion Luminaries like Tom Ford, Serge Bennet’, Karl Lagerfeld, Virgil Abloh, Jerry Lorenzo, Balmain, Don C, Dapper Dan, Ricardo Tishe has converged to put Malik Yusef in a prime position to open an unprecedented agency called “MAIYJE” that partners with dozens of other agencies like VELUXSITY, SYNCR, Heard it Hear, Sinema Sonics, and other outlets of note that seek and solicit music, concepts, and campaigns.

Although MAIYJE is a new endeavor for Malik as a structured way of doing agency business, he has previously served as auxiliary “attache” to Global agencies like Leo Burnett, Ogilvy, Burrell, DDBO Worldwide, Flowers Communications, Carol H. Williams, Common Ground, Global Hue, to name a few assisting with campaigns as large as Absolut Vodka, Chevrolet, McDonalds, Miller, Sprite, Coca Cola, Heinekein, Benz as he is no stranger to these blue chip and fortune 500 companies.

Between the needs of UMPG, and these partner outlets, that is hundreds of thousands of placement opportunities. It's safe to say, Malik will be needing a whole lot of music to curate, co-write, and co-produce to keep up with this rigorous demand.

If you are a MUSIC ARTIST, PRODUCER, LYRICIST, SPOKEN WORD ARTIST, DANCER, FASHION DESIGNER, GRAPHIC DESIGNER, MODELS, ACTORS, VOICE OVER ARTISTS/ACTORS, COPYWRITERS then you should contact one of the partners that solicit the services of Malik for Music, concepts, and campaigns.

###
MAIYJE is an Art factory and Idea firm, an agency non-controlled by creatives, guided by spirits. As the industries #1 support agency specializing in music creations, concepts and campaigns. Categories include but are not limited to Literary Advertising, Marketing, Electronic Media, Social media, Film, Television, Print and Not for profits.