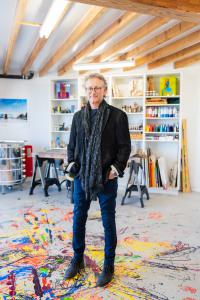 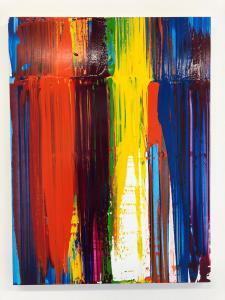 Lawrence R. Armstrong has always been fascinated by layers' concept by layering canvases separately then combining them to form a single piece collectively.

My work, both in Art and Architecture, is an ongoing exploration of the concept of Layers. I have always been aware of and fascinated by Layers in the Natural and Built Environment.”
— Lawrence R. Armstrong

NEW YORK, NY, USA, October 28, 2020 /EINPresswire.com/ — Established American Artist and Architect Lawrence R. Armstrong creates large-scale, gestural paintings, layered metal, and layered glass structures built up through his visionary approach in design; and continued exploration of layers, both conceptual and in the medium. Armstrong's installations are vibrant, and their spatial prominence enhances the overall effect of his work.

The logistically challenging artwork takes time and reveals the final result organically, with a fresh and bold expression. His work shows a unique approach to abstractions as a process and moves beyond just a color language. His creative process is gradual, but intently approaching his media with an open mind and no preconceived idea in his head. He has always been fascinated by layers' concept by layering canvases separately then combining them to form a single piece collectively.

Armstrong received his bachelor's degree in architecture from Kent State University. After his undergraduate studies, he spent a semester in Italy, where he expanded his understanding of classical architecture.

He built an accomplished architectural career and is a licensed architect in over 40 states. The United States Green Building Council has also granted him status as a LEED (Leadership in Energy and Environmental Design) accredited professional. The master architect served as the CEO of award-winning international architectural firm Ware Malcomb for 28 years. Recently, he transitioned to the role of Chairman.

Lawrence R. Armstrong makes sure to keep in touch with his artistic side and continually develop his creativity. When he is not running his dynamic architecture firm, he works in his art studio or travels to other countries. His journeys across the globe include visits to North America, Latin America, Europe, Japan, and the Middle East. His international travels influence his art and professional practice. To preserve ideas and inspiration, Armstrong brings with him numerous sketchbooks and his camera.

The self-description of Lawrence R. Armstrong's artistry provides a unique insight into the creative process. He states that each of his works of art appears to him spontaneously. Sensory influences provoke these bouts of inspiration. More specifically, the initial thought may arise from a piece of music, written text, built or natural environment, people, mood, events, or any combination of these sources.

As an artist, Armstrong immerses himself into these catalysts of creativity. He also cites other artists such as Corbusier, Meier, Eisenman, Pollack, Warhol, and others as inspiration sources and influencers. For him, a concept can develop for days or weeks before the appropriate media becomes clear to him. Once he attains clarity, Armstrong creates a sketch and spends additional time to understand his vision. He can produce several pieces in rapid succession. Such is the skill level of the master architect, sculptor, and painter.

Lawrence R. Armstrong is also a speaker and has presented as a guest lecturer for USC Lusk Center for Real Estate, Graduate Real Estate Program. He was also a Design Juror for the Fourth Year Integrated Design Project for his alma mater, Kent State University. He has also been published on several media platforms. These publications include OC Metro, Real Estate Business Online, Development Magazine, Professional report Magazine, and ArtTour International Magazine.
Internationally recognized for his artistic achievements, Armstrong has exhibited his artwork in solo shows in New York City, Milan, Florence, and Los Angeles. He's also exhibited his artwork in prestigious art shows and fairs, including the SOFA Art Fair in Chicago, Illinois, the Galleria 360 EmozionArte show in Florence, Italy, and Art Comes Alive in New York City. His awards include the 2020 ArtTour International Magazine's Masters Award, the Sandro Botticelli Prize in Florence, Italy, and the Kent State University Advocacy Award.

With his diverse design background, it is no wonder that Lawrence R. Armstrong has developed a unique style and art form based on the concept of layers.