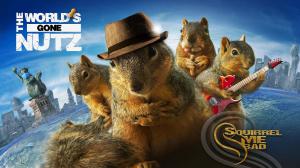 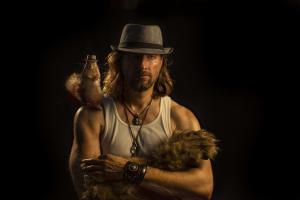 The World's Gone Nutz Available Now on All Major Platforms

LOS ANGELES, CALIFORNIA, UNITED STATES, September 23, 2020 /EINPresswire.com/ — Hiring creatures in his own backyard (who work for peanuts, quite literally), filmmaker, and musician Daniel Robert Cohn introduces the global debut of Squirrel Me Bad—an all-squirrel band and performance ensemble. The furry group’s first single “The World’s Gone Nutz,” an epic anthem to 2020, is available now in audio and video.

In the midst of this year’s pandemic, social unrest, fires, and other crises, Cohn imagined creating a unique project to highlight the unprecedented times. By experimenting with innovative production techniques, using his back lawn as a natural green screen, and capturing a library of real-life squirrel poses and movements, Cohn used nuanced editing and creative digital compositing to bring Squirrel Me Bad to life. From a squirrel president named “Sqump” to mask-wearing squirrels fighting over toilet paper, Cohn captures 2020 in a nutshell.

“Like millions of others, I found myself underemployed, to say the least,” explained Cohn. “I felt discouraged and dismayed, but also compelled to say something. I needed to create a statement that not only captured how I was feeling about the world but one that could potentially lift people’s spirits. I was watching the squirrels outside my window one morning, and had this crazy idea.”

To accompany the launch of the video, Cohn has launched a website and a full line of themed merchandise. A portion of the proceeds from all sales will go to organizations such as Empowered by Light, helping to empower communities on the frontlines of climate change, loss of wildlife, and environmental devastation.

Daniel Robert Cohn is a WGA writer, director, producer, editor, animator, photographer, graphic designer, actor, and musician. He was born and raised in Commack, NY, and has been making movies since the age of 10. He attended the School of Visual Arts in New York City on a film-directing scholarship. After moving to L.A. to pursue filmmaking, Daniel wrote several screenplays for studios such as Universal Pictures, Constantin Film, Robert Cort Productions, and Lakeshore Entertainment, and opened Namaste Pictures, his own production company. After the 2008 writers’ strike, Cohn moved to San Francisco, where he has helped develop and direct ad campaigns and branded entertainment projects for brands like Mutual of Omaha, Airstream, Oracle, Coffee Meets Bagel and more. He recently finished his latest feature screenplay, “You Have Arrived”, a tech-propelled dramedy. Cohn is the sole scribe on the project, teaming with producer Laurence Mark (The Greatest Showman) and director Steve Pink (Hot Tub Time Machine) to set it up.