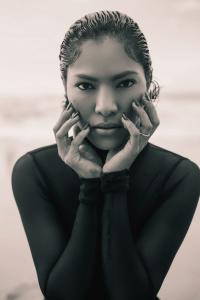 Be Kind aims to raise awareness to fight against the abuse of children and women during the ongoing pandemic.

BUSAN, SOUTH KOREA, September 23, 2020 /EINPresswire.com/ — Singing sensation, Cyrilia, is pleased to announce the launch of her live version of Be Kind, an international hit that speaks to the abuse of women and children.

Cyrilia Lopez, aka Cyrilia, is a multi-genre bending singer/songwriter and performer from Trinidad & Tobago. The artist’s voice channels the multi-cultural history of her homelands, India, Spain, Africa, Britain, China, and France, and embraces her life experience to create ground-breaking music designed to inspire women from around the world.

In the star’s most recent news, Cyrilia is excited to announce the re-launch a live version of one of her best-selling hits, Be Kind. Throughout the lyrics of Be Kind, Cyrilia details the hurt, betrayal, and pain she endured from her own experience with abuse – all in a hauntingly beautiful voice that leaves the listener completely mesmerized.

“Be Kind is such an important piece for me because it provided an outlet to express my emotions during such a tumultuous journey,” says Cyrilia. “As I stay on top of the news, it has become evident that women and children are experiencing incidents of abuse at increased rates, due to the ongoing pandemic. As such, I felt I needed to do a live, new version of Be Kind to raise awareness and help fight against this abuse.”

“There have been many abusers in my life, and I want others to know they are not alone,” states Cyrilia. “Recently, I called out the names of the men who molested and raped me in a live stream. It’s time abusers are held accountable for their actions and I hope the re-launch of Be Kind helps women and children to gain confidence and momentum as they move forward.”

Watch the Be Kind Video here

In addition to the re-release of Be Kind, Cyrilia will be launching her latest song, So Empty, on September 28th, 2020. So Empty is a song about the unrequited love the singer feels towards her mother, who did little to protect her from the sexual abuse she experienced.

For more information about Cyrilia, or to listen to her ground-breaking and soulful music, please visit her official website at https://thecyrilia.com.

Cyrilia Lopez, known as Cyrilia, comes from the Caribbean Island of Trinidad & Tobago. Born on January 14th, 1992, the singer/songwriter believes in mixing the energies of different genres to express different emotions. Cyrilia believes music is made to make us free.