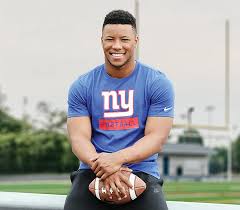 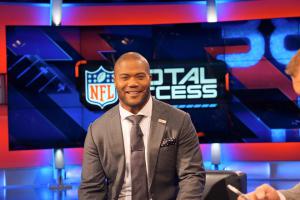 "Every time this guy touches the ball, all 11 people on the field have to be on alert. This guy can score from anywhere on the football field." Michael Robinson

LOS ANGELES, CA, US, June 30, 2020 /EINPresswire.com/ — Saquan Barkley, otherwise known as a player "touched by the hand of God" after being drafted with the second-overall pick in 2018, has proven to be great a home-run hitter amongst NFL running backs. Having been deprived of his fitness and effectiveness by an ankle sprain, Saquan has won many fans for what promises to be an ambitious and exciting NFL season to come. Amongst those excited for game-changing playmakers includes NFL Total Access, former Penn State quarterback, and Pro Bowl NFL fullback, Michael Robinson.

According to fellow Penn State product Michael Robinson, opposing teams would be foolish to think that Barkley is nothing that they can't control. Robinson has declared Barkley's presence as essential to both Giants quarterback Daniel Jones and first-year Giants head coach Joe Judge. "Every time this guy touches the ball, all 11 people on the field have to be on alert. This guy can score from anywhere on the football field," said Robinson.

"Talk about a first-year head football coach in Joe Judge, the perfect insurance policy for a first-year head coach is to just turn around and hand the football off. The young quarterback, Daniel Jones, hasn't seen all the defenses out there. He’s going to get confused at times”.

Robinson continued by stating, "Guess what guys, turn around and hand the ball off to, yeah I’m going to say it, he is the most explosive football player in the National Football League. I know you all are going to say, ‘Mike you’re just saying that because he’s a Nittany Lion and all that.’ I’m not, guys."

After the departure of the Eli Manning era, Jones and Barkley together have become the core of the new NY Giants generation. Though both will be playing in a new offense this season under new offensive coordinator Jason Garrett, one game late in the 2019 season gave a preview of what the two are capable at full strength together: In a Week 16 win against the Washington Redskins, Jones threw for 352 yards and five touchdowns, while Barkley ran for 189 yards on 22 carries and caught four passes for 90 yards. Barkley scored two touchdowns, one on a 67-yard romp to the endzone and another on a 33-yard pass from Jones.

As Barkley looks to bounce back from a sophomore season short-lived by injury, Barkley and many of his supports are looking forward to what is sure to be a dominant third season.