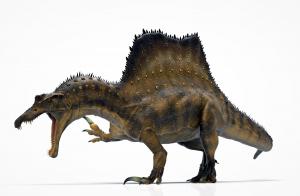 Spinosaurus showing the huge claws it used to defend itself. (artist: Manuel Gil) 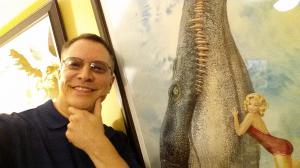 How did the “new”, aquatic Spinosaurus fare against one of the deadliest predators to ever walk the earth?

. . . if forced to fight, the world’s largest fisherman would use its lethal talons to make any attacker regret trying to make a meal of it.”
— Max Hawthorne

BUCKINGHAM, PA, US, June 29, 2020 /EINPresswire.com/ — Spinosaurus, the legendary bipedal villain of “Jurassic Park 3”, a terrifying man-eater that snapped a T-rex’s neck with its bare claws, just got a makeover, and tongues are wagging. Recent fossils discoveries have revealed that the huge flesh-eater was first and foremost not bipedal. It mainly walked on all fours like a giant crocodile. And, despite its film debut, its diet did not include other dinosaurs for the most part, but rather something far less impressive: fish.

But Spinosaurus wasn’t alone. It shared its Cretaceous swamps, lakes and rivers with other huge predators, including the creature popularly known as the “African T-rex”: Carcharodontosaurus. This was a dinosaur as big and bad as the North American Tyrannosaurus, so how did the fish-eating Spinosaurus survive conflicts with its massive meat-eating rival?

Max Hawthorne, author of the bestselling Kronos Rising dinosaur fiction series, and an amateur paleontologist whose theory on plesiosaur swim mechanics may have solved how these four-flippered marine reptiles swam, recently put forth a theory addressing that exact question.

“The thing about Spinosaurus is that it was superbly adapted as a piscivore,” Hawthorne said during a recent interview. “It had long, narrow skull, like a gharial, filled with sharp, conical teeth that were designed to pierce and hold prey. At the end of its jaws was an alcove – a curved section that accommodated slippery fish. It also had foramina on its head – pressure sensors that detected movement in the surrounding water. It could probably snare fish in the dark, like crocodilians can.”

“We also know,” Hawthorne continued, “courtesy of the incredible work by paleontologists Ibrahim, et al, that it had a long, high tail, designed to propel it though the water, like an alligator or newt.” When asked about encounters with its other resident big-bad, Carcharodontosaurus, he added, “There was a price to pay for all those aquatic adaptations. Having a snout like a gharial was great for snapping up fish, but a slender skull isn’t made for combat with other colossi. You don’t pit a fencing foil against a broadsword. Similarly, the comparatively fragile jaws of Spinosaurus would not have fared well against the crushing, slashing jaws of a dinosaur killer like Carcharodontosaurus.”

When asked if “Spino” would have had encounters with the “African T-rex”, and if so, how it might have fared against such a nemesis, Hawthorne was quick to respond. “Confrontations were inevitable. Although Spinosaurus probably spent most of its time in the water, it undoubtedly came ashore to nest, to bask, or, if its lake or river dried up, to relocate (I believe the “sail” was a fat-storing hump like in today’s camels – a defense against dry seasons). Add to that, Carcharodontosaurus had to drink, and a Spino sitting at the river’s edge was a potential meal. We know conflicts happened because one fossilized Spinosaurus neural spine has a healed bite mark on it that matches the bite of Carcharodontosaurus.

But how could Spinosaurus survive such an attack? Hawthorne believes the dinosaur, despite being a primary quadruped, could still rear up on its hind legs like a bear, ground sloth, or giant anteater. In fact, he feels that the anteater is a perfect comparison. “Anteaters have a long, fragile snout, a large tail that helps balance them when they stand up, and they are often preyed upon by jaguars. But anteaters are not helpless,” Hawthorne pointed out. “They have the same weapons that Spinosaurus did: long, curved talons on the forelimbs. And this is how Spino would defend itself against meat-eaters like the 42-foot, 8+ ton Carcharodontosaurus.”

The author pictures Spinosaurus rearing up, two stories high, with its vulnerable head drawn back, and striking the face of any attacker as it came at it. “We know that theropods could not turn their ‘hands’ palm down, but they could move them inwardly in a wide clapping motion. For example, picture the flapping of a bird’s wings. This meant powerful slashes could be directed at anything attacking it. Anteaters have driven off jaguars this way, and you can bet Spinosaurus behaved similarly. Logically, it would’ve first tried escaping into the water, and bluffing if that failed. But, if forced to fight, the world’s largest fisherman would use its lethal talons to make any attacker regret trying to make a meal of it.”