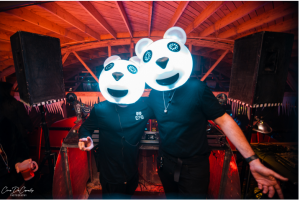 All Projects Available Now on All Major Platforms

The original song was inspired when the Electric Polar Bears came across “the penguin of their dreams”, in Miami at the 2019 Winter Music Conference. She was dancing hard enough to break the ice, literally and figuratively, but it was the polar bears that had to make the first move.

While in Miami, the Electric Polar Bears also met Lavelle Dupree who was interested in putting his own spin on the song, which is exactly what happened with the remix, in collaboration with Freshcobar. The remix to “Break The Ice” takes it back to the basics with groovy, funky sounds.

Unlike most music videos, the footage used in the official music video for “Break The Ice” was filmed before the song was produced. It was shot during their show at the 2019 Winter Music Conference in Miami, FL. The Electric Polar Bears created the music video to share the joy and entertainment they had in Miami when they first saw the penguin.

The official music video is available now on YouTube. “Break The Ice” and “Break The Ice (Freshcobar & Lavelle Dupree Remix)” are available on all major platforms. Follow Electric Polar Bears on Instagram and Facebook to keep up with their growing success.

Electric Polar Bears, or EPB, are a growing future house group born out of the love for throwing an engaging party. Whether, with his brother or solo, both polar bears know how to get the igloo a rocking. They have proven they know how to bring the energy to any room or pool deck with a blend of progressive EDM sound and funky future/tech-house. From their premier on Groove Cruise LA 2017 and their US debut at Time Nightclub, they have toured with Deorro and performed the headlining set on Groove Cruise Cabo 2018. They have also appeared at Decadence AZ and are eager to perform again when it is safe to do so.