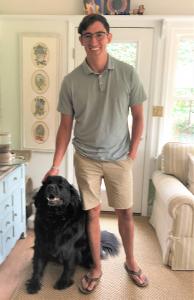 INDIAN TRAIL, NC, UNITED STATES, April 3, 2020 /EINPresswire.com/ — Each year, approximately 6-7 million unwanted animals go to the shelter in the U.S. Most never come out again. Christopher David Muggler says it doesn’t have to be this way. Fostering a pet is another option if you don’t want to commit to owning one on a permanent basis. Here, Christopher Muggler talks about the benefits of fostering a pet and making a difference in an animal’s life.

“Maybe you can’t save them all,” begins Chris Muggler, “but you can save one.” Even if you’re not ready for pet ownership, fostering is a temporary solution that grants a reprieve to an animal in a moment of need and makes a huge difference to the life of that animal.

“I love to be a foster dog parent,” Christopher Muggler says with a smile. “Since I can’t commit to doing it year-round, fostering works out perfectly for me,” he says. However Christopher says fostering takes almost as much commitment as adopting. “It’s a job, but it’s an enjoyable job with a lot of love and hugs,” he says. It’s a way to help out the shelter and give a home to an animal that is waiting, he explains.

People foster for different reasons, he adds. Sometimes the shelter simply runs out of room and needs the extra space, he says. Rather than euthanize the animals, they’re placed into loving homes that agree to foster them until they’re adopted or for a predetermined amount of time, Chris Muggler explains.

In other cases, the animal may just be too young to be kept at the shelter, he says. When a mom disappears from a baby’s life, shelters can’t handle them if they’re too little. By agreeing to foster for a certain amount of time, you’re giving that baby a chance for life, he adds.

Some animals are coming in from the wild, he explains. With fostering, all the medical care is taken care of, but it may need a chance to get used to humans. The animal is thoroughly checked out by a veterinarian, he says, so they make sure the pet is healthy enough to go into a home.

If you decide you want to adopt the animal, the foster parent is always given first choice, he says. “But the biggest reason I love fostering,” adds Chris David Muggler, “is that I get to give a little bit of happiness to an animal that might other not have it. To me, that’s worth everything.”