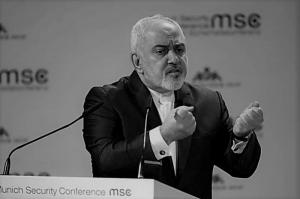 Zarif, 8 of whose diplomats have been expelled or imprisoned for engaging in terrorism in Europe, accuses the Iranian Resistance of terrorism

Lies by Zarif and other regime leaders reflects their desperation in the face of the nationwide uprising and the Iranian people’s widespread support for the PMOI inside and outside Iran.”
— NCRI

That Saudi Arabiya or any other country provides money, even a dollar, to finance the expenses of the PMOI, whether in Iran, in the region, or internationally, is absolutely false.

On January 9, 2018, in the midst of the Iranian people’s uprising, the regime’s Supreme Leader Ali Khamenei, claimed that Saudi Arabiya pays for the PMOI expenses. Regurgitating these lies by Zarif and other regime leaders only reflects their desperation in the face of the nationwide uprising and the Iranian people’s widespread support for the PMOI inside and outside Iran. It is also a sign of their anger over the regime’s increasing international isolation. Zarif’s agitation and desperation were quite evident in his remarks and body language.

It is amusingly ironic that the foreign minister of the godfather of international terrorism accuses the Iranian people’s just Resistance of terrorism. In an unprecedented development, in less than two years, seven of Zarif’s diplomat terrorists have been expelled from European countries for their direct involvement in terrorism and another has been jailed for past 20 months awaiting trial in Belgium.

Along with the regime’s Supreme Leader Ali Khamenei, its President Hassan Rouhani, and other officials, Zarif must face justice for his role in crime against humanity, as did Hitler’s Foreign Minister, Joachim von Ribbentrop.

Secretariat of the National Council of Resistance of Iran
February 15, 2020