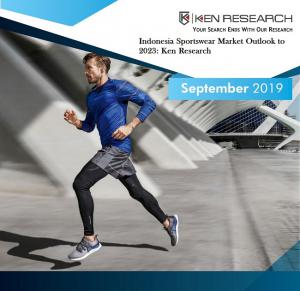 The market is expected to register a positive CAGR of 6.6% in terms of revenue during the forecast period of 2019E–2023E.

Internet retailing is gaining prominence in terms of sportswear distribution channel in Indonesia owing to the increasing smartphone and internet penetration in the country.

The industry is driven by fashion trends such as street style and athleisure and are seen as a permanent fixture spanning across each group and gender among Indonesians.

Rising Disposable Income and Expanding Middle Class Population of Indonesia: Disposable income of the growing middle class coupled with rising GDP per capita from USD 2,984.0 in 2010 to USD 3,846.0 in 2017. The other factors leading to rise of the middle class is the economic growth of Indonesia. The GDP of Indonesia during 2017 was USD 1.016 trillion. In accordance with the World Bank report released in 2012, around 7 million people join the middle class each year in Indonesia. The higher the consumer spending of the group has led to rising demand for sports apparel and footwear. Another trend that has fostered the demand for sportswear is the increase in the young population base in Indonesia and the trends associated with them.

Rising awareness of Healthy Lifestyle: For the Indonesians, sports are no longer just physical exercise. It has become a lifestyle choice and a means of entertainment. A jakpat.net survey from 2017 stated that around 44.2% respondents claimed that they played sports once a week and around 38.4% respondents claimed that they played sport twice or thrice in a week. Some of the leading sports activities came out to be jogging / running and football / Futsal thereby, driving the demand for running based and football based apparel and footwear. Apart from that, the sportswear industry of Indonesia is experiencing trends such as athleisure which is a combination of fashion and functionality.

Internet Retailing: Sportswear apparel and footwear within Indonesia is forecasted to grow at a massive double digit CAGR of 22.4% via internet based retailing over 2019-2023. Internet retailing has been particularly popular with the women customers. It has been observed that women customers are better adapting the E-commerce channel than the male customers. In addition to that, the channel is rapidly growing as internet based retailers hold large scale seasonal sale and offer discounts on a daily basis with limited period sale. Along with the emergence of the E-commerce websites, it is expected that sales via traditional stores would decline in the near future.

Analysts at Ken Research in their latest publication “Indonesia Sportswear Market Outlook to 2023 – By Category (Running, Badminton, Football, Futsal, Basketball and Others), By End Users (Men, Women, Children & Teens); By Distribution Channel (Stores based Retailing & Internet Retailing); By Sports Inspired and Performance Driven Apparel and Footwear” believe that increasing number of retail stores, increasing penetration of social media, collaboration based promotion, cost effective production will collectively drive the market revenue in the near future. The market is expected to register a positive CAGR of 6.6% in terms of revenue during the forecast period of 2019E–2023E.

• By Type of Products

Key Topics Covered in the Report

For more information on the research report, refer to below link: