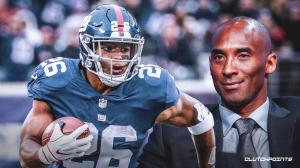 “I write your phrase Mamba Mentality on my cleats before practices and games because I know that attitude is what it takes to be special.” – Saquon Barkley

LOS ANGELES, CA, UNITED STATES, January 28, 2020 /EINPresswire.com/ — For a generation of athletes in all sports, the shocking death of Kobe Bryant at the age of 41 leaves a massive void. Bryant was an inspiration to so many no matter if you were involved in any sport or not. Now, count Saquon Barkley as feeling as if a part of his athletic world has been ripped from him.

Even though the two were in different sports, Bryant was a huge inspiration to Barkley as an athlete. Barkley wrote “Mamba Mentality” on his cleats before practices and games, in homage to the Lakers and NBA great who challenged legions of players to “attack what’s in front of you with passion and purpose, without fear and doubt and without an ounce of quit.’’

It would seem Barkley personally new Bryant due to such aspirations to be like him as an athlete, but Barkley, the star New York Giants running back, never met Bryant in person. The two only shared a social media interaction back in July of 2019 after Barkley posted a video on the UNINTERRUPTED website, an open letter to one of his idols.

In the video, Barkley recounted to Bryant the poem “Ozymandias,’’ about a traveler who comes across an ancient kingdom that is now covered in sand. His video goes as follows:

“At the end of it, all that remains is a broken statue of the King Ozymandias with the inscriptions: ‘Look on my Works, ye mighty, and despair!’

“But there is nothing to see except sand. This poem makes me think what it actually takes to leave a lasting legacy. The best legacy starts humbly and lasts long after you’re reign is over. You, you have proven that. You used to shoot balled up socks into your laundry baskets. I remember the first time I put on football pads when I was 8. I felt like Peter Parker putting on his Spider-Man suit for the first time.

“You’re not born with legacy. Someone recently told me when I was born there were only 10 Saquon’s. When you were born, there were only 14 Kobe’s. And now there’s thousands. Can you believe that? Legacy is not something you can buy, borrow, steal or anoint to yourself. It can only be created through impacting others in a positive way.

“You gave Giannis [Antetokounmpo] a piece of your Mamba Mentality and he made it his own. He’s now an MVP. I write your phrase Mamba Mentality on my cleats before practices and games because I know that attitude is what it takes to be special. Your legacy isn’t about trophies, rings, money or material objects. Your legacy lives on in the hearts and minds of athletes and fans around the world, like myself.

“King Ozymandias may not remain, but the Mamba Mentality legacy will live on forever. I just hope one day I can inspire others the way you inspired me.’’

Bryant responded to this message by tweeting, “Love my brotha” with the hashtag “#yourturn.”