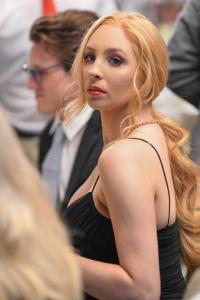 Stanton will work directly with Toys For Tots, spreading awareness to give back and support Marines, their families, and the underprivileged.

LOS ANGELES, CA, UNITED STATES, November 20, 2019 /EINPresswire.com/ — Elizabeth Stanton, Actress and Television Host, is gearing up to give back to the community this holiday season. She recently flew to Yerevan, Armenia October 14th-18th to take part in the “Impact Humanity Television and Film Festival,” and is now being invited to the be the special celebrity guest host for the Hollywood Christmas Parade and Toys for Tots.

During the parade, Stanton will work directly with Toys for Tots, spreading awareness to give back and support Marines, their families, and the underprivileged. The Hollywood Christmas Parade has been a partner with Toys for Tots for the last 10 years, and will take place on December 1st on Hollywood Boulevard. It will then air on the CW on December 13 from 8-10 PM.

“I enjoy doing this because it allows me to work closely with charities that give back to those in need around the holidays, explains Stanton, “when I was young, it was always a family tradition to wrap up toys and bring them to Toys for Tots. Once I started hosting for the parade and working with them, I was able to see what an amazing job the Marines do with this organization.”

The Hollywood Christmas Parade isn’t the only event that Stanton has done charity work for. She has always had a curiosity for new cultures and a passion for making a difference in people’s lives. She has traveled to different parts of Africa to feed children, she has been a spokesperson for recognizing the Armenian Genocide, and has called attention to the worldwide crisis of anti-Semitism. Her 16th birthday was a fundraiser for “The Marine Toys for Tots” and she has since been an active volunteer for them.

“I have thrown several big events in December to gather toys together and raise awareness for Toys for Tots,” continues Stanton, “this year I am encouraging all of my friends, everyone I know, and everyone I can reach to band together to help provide toys for Toys for Tots. You can throw your own parties, create your own social media groups and pages, and work together to really show the holiday spirit and give back to those who are in need.”

Anyone interested in donating should visit Hollywood Boulevard on December 1st, or visit the Toys for Tots website to see how they can give back. “It has been very rewarding to see so many families being helped every year,” concludes Stanton, “the Parade has been a great inspiration for me and everyone watching because it is all about giving back and helping those in need during the holiday season. Not only is Toys for Tots involved, but there are so many other national charities that get to talk about the great things they do and are able to inspire others to help.”