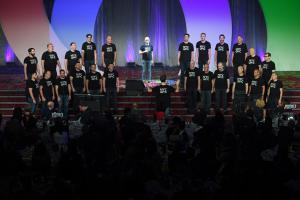 True inclusion is a thoughtful, vigorous and disciplined exercise that is needed in order to develop strategies to ensure we (our industry) live up to our goals in business, in society and in life.”
— Michelle Ray, Executive Director WKF

WASHINGTON, D.C. , UNITED STATES, September 20, 2019 /EINPresswire.com/ — The media and entertainment industry celebrated the 36th Annual Walter Kaitz Foundation Fundraising Dinner on Wednesday evening. The event, which served as the capstone of Diversity Week, was infused with excitement and entertainment. This year’s Kaitz Dinner raised over $1.4 Million while advancing diversity, equity and inclusion in media and entertainment. The funds will enable four nonprofit organizations to reach a grant making milestone this year, distributing over $20 Million in funds to the Emma L. Bowen Foundation, the National Association for Multi-ethnicity in Communications (NAMIC), the T. Howard Foundation, and Women in Cable Telecommunications (WICT).

The dinner theme for 2019 was “We Are All In” recognizing the crucial need to go beyond statistical representation in the workforce and to be more inclusive in all aspects of hiring, business operations, and decision-making roles. The dinner was attended by nearly 800 individuals representing 68 companies and organizations.

During the dinner, the Walter Kaitz Foundation also recognized two organizations with honors and awards for their commitment to diversity and inclusion.

Comcast NBCUniversal was awarded the 2019 Diversity Champion Award. Dave Watson, President and CEO, Comcast Cable and Senior EVP, Comcast Corporation, accepted the award on behalf of Comcast NBCUniversal. “Beyond business results, ours is an industry where everyone is welcome,” Watson said, “everyone has a shot at making a difference, and everyone has a shot at realizing their dreams.” Watson also acknowledged the company’s nearly two decades long partnership with City Year.

City Year, an affiliate of AmeriCorps, was awarded the 2019 Diversity Advocate Award. Jim Balfanz, president of City Year accepted the award. Joining Balfanz was City Year Corps member Cornelius Rhone. Rhone spoke passionately about his work in Harlem’s P.S. 83 and, specifically about a young student with behavioral issues, who, with consistent reinforcement and learned coping mechanisms, now excels in his work. Rhone is now in his second year of service with the organization.

The dinner program highlighted a true diversity of voices and perspectives in media and entertainment. The New York City Gay Men’s Chorus (NYCGMC), a pioneering voice for the LGBTQ community in NYC, opened the dinner with a surprise performance of their stirring original anthem, “What if Truth is All we Have,” that commemorates the 50th Anniversary of the Stonewall Uprising.

Host Chris Spencer, actor, writer, comedian, producer and host of Icons, Idols & Influencers, an interview series on Aspire TV, welcomed the crowd and brought comic relief to the proceedings. Spencer shared his personal lessons on diversity and inclusion from his experience working alongside female comedians in Hollywood.

The Foundation’s Executive Director, Michelle Ray, welcomed guests and offered that “true inclusion is a thoughtful, vigorous and disciplined exercise that is needed in order to develop strategies to ensure we (our industry) live up to our goals in business, in society and in life.”

Michael Powell, Former FCC Chairman, and President and CEO of NCTA – Internet and Television Association, delivered stirring remarks that commemorated the 400th year since the arrival of the first slaves to the then British Colonies in 1619. Quoting the New York Times Magazine special section on 1619, Powell noted, “we are a nation forged on both an ideal and a lie. To be a true diversity warrior … requires that we stand against the suffocating heat of racism, stand against hostility against the LGBTQ community, stand against the oppression of women, and stand for the fundamental equality of all, giving true meaning to our founding ideals.”

Christina Bell, recording artist and actress starring in the Lifetime Feature Movie, “The Clark Sisters: The First Ladies of Gospel,” premiering in 2020, closed the dinner with a performance of Lift Every Voice and Sing, commonly known as the Black National Anthem.

About the Walter Kaitz Foundation
The Walter Kaitz Foundation advances diversity, equity and inclusion in the media and entertainment industries. The Foundation provides targeted grants to organizations, supports vital industry research that promote diversity and inclusion in the workforce and collaborates with key stakeholders on the curation and presentation of diverse content. The Foundation also develops unique programs and initiatives designed to educate and facilitate collaboration between partners and benefactors that align with our mission. Over the past 15 years, WKF has distributed over $19.5 M in grants in support of diverse programs and initiatives.