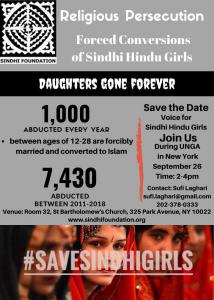 According to Pakistan's own Human Rights Commission 7,430 Sindhi Hindu Girls have been abducted and forcibly converted to Islam.”
— Sufi Laghari

NEW YORK CITY, NEW YORK, USA, September 10, 2019 /EINPresswire.com/ — Sindhi Foundation would like to invite you to attend the program "Daughters Gone Forever" Religious Persecution: Forced Conversions of Sindhi Hindu Girls. It will be held in New York during the United Nation’s General Assembly.

Forced marriages and forced conversions of Sindhi Hindu girls continue to take place. It has been estimated that more than one thousand girls ages 11-28 are abducted and forcibly married off to a Muslim man in order to convert them to Islam. The men are few decades older and already married in most cases.

We hope that you will attend the program, learned more about this issue and you will help us raise awareness about this human rights issue.