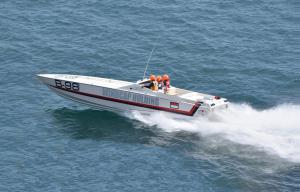 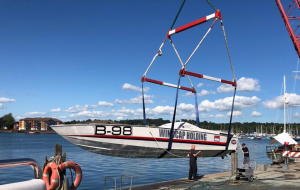 Wild Eleven is lifted into the water at Poole Marina 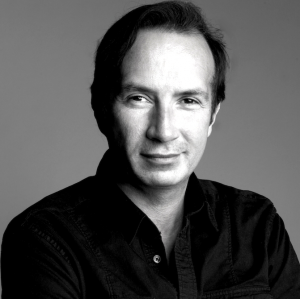 The Windcraft racing team ran its first race of the season, entering its iconic 38-foot Cigarette Hawk, Wild Eleven, in the Offshore 1 class at Poole in Dorset.

Wild Eleven — a Cigarette Hawk — is a very stable and safe boat. I’ve got another Cigarette, an earlier and slightly shorter model, and the improvement in stability is remarkable.”
— Jerome Brarda

GREYSTONES, IRELAND, June 19, 2019 /EINPresswire.com/ — The Windcraft racing team participated in its first race of the offshore season, entering its iconic 38-foot Cigarette Hawk, Wild Eleven, in the Offshore 1 class at Poole in Dorset on Sunday 9 June.

The races that day were the first in the World Offshore Championship series organised by the UK Offshore Powerboat Racing Association (UKOPRA) over this summer, with further races in the series due in July off Guernsey and concluding in late August with contests over the long and challenging Torquay to Cowes course.

Driver Jerome Brarda and throttleman Eric Adam were joined by navigator Gordon Compton, a very experienced offshore racer who has competed in long endurance races such as the Round Britain powerboat race, London to Monte Carlo, and the Cowes-Torquay-Cowes circuit.

As they purchased Wild Eleven just last January, the team spent the months since preparing and tuning the machine, which is powered by two 700HP Mercury V8 engines.

Unfortunately, with just about ten minutes left in the 1.5-hour race, Wild Eleven suffered fuel pump difficulties and had to retire. But Brarda, whose involvement in the sport goes back to 1986, pronounced himself delighted with her performance.

“This is a very stable and safe boat,” he said. “I’ve got another Cigarette, an earlier and slightly shorter model, and the improvement in stability is remarkable.

“We’ll be properly ready for the next race on Guernsey once we sort out the fuel pumps, and I’ve no doubt this boat gives us an excellent chance of winning one or more races during the season. The engines ran beautifully and we are very happy with the boat's performance.”

Wild Eleven raced under the flag of Monaco, where she is registered. Brarda, who has a base in Florida, raced under the US flag, while Eric Adam flew the French tricolour and Gordon Thompson the Union Jack.

Adam’s involvement in motorsports spans more than 30 years, starting in powerboats in the Leader Offshore Racing team of the late ex-Formula 1 driver Didier Pironi, then in rallying, then managing a major car racing team with Ferrari in the prestigious World Endurance Championship. Taking on the role of throttleman with Windcraft marks his return to offshore powerboating.

The team will be back in action on 6 July, when the Guernsey Powerboat Association will host the Guernsey Gold Cup from the 5th to the 8th of the month.

Windcraft's audiovisual media partner InterZone Pictures will begin filming at the next race off Guernsey early in July, and in the meantime Windcraft will set a date for Wild Eleven's first speed record attempt. The team will consider several possible routes, including Portsmouth (UK) to Cherbourg (France), Monte Carlo to St Tropez, or Monte Carlo to Cannes.

INTERZONE:
InterZone has several projects in development, including a biopic of a famous Irish revolutionary of the early twentieth century.

But we want to make some TV movies before getting deep into that. Which is why we are focused on filming Jerome Brarda's attempt on World Powerboat speed records both on European runs and those in, or off, the USA — and integrating the footage into our series of documentaries on the sport of offshore powerboat racing.