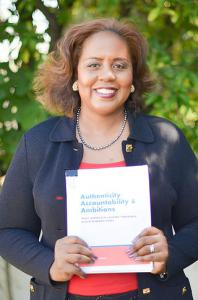 Kimlin Johnson is starting her book tour throughout colleges and universities in California, with a plan to expand to schools nationwide.

LOS ANGELES, CA, UNITED STATES, June 7, 2019 /EINPresswire.com/ — Acclaimed author of “Authenticity, Accountability & Ambitions: Speaking the Truth Through a Black Woman's Eyes (AAA),” and Civil Rights activist, Kimlin Charise Johnson has certainly had a busy year so far. She was recently named as one of 50 Phenomenal Black Women in STEM (Science, Technology, Engineering, Math) by the Los Angeles Council of Black Professional Engineers (www.lablackengineers.org), and now she’s ready to kick off her new book tour on her influential novel.

Johnson, who identifies herself as a race relations expert who is trying to make America better, is starting her book tour throughout colleges and universities in California, with a plan to expand to schools nationwide. The book tour will be titled, “Let’s Start the Dialogue… Dialogue for Change,” and will be targeting college students.

“Kimlin Johnson reveals the context of her riveting interviews with Dr. Cecil L. Chip Murray and then takes us behind the curtain into her true, raw life story,” raves a reader online, “which truly illuminates the racial struggles at the forefront of society today.”

Although the target audience for AAA is college students, Johnson hopes to not only speak at colleges and universities but trade schools, community colleges, and even law schools. In addition, she has decided to take her tour to corporate offices in an effort to create more meaningful relationships and better morale. The ultimate reason? “To make America better.”

For more information about Johnson’s new book, visit her website at: http://www.kimlinjohnson.com. Part history, part memoir and part self-help, AAA is designed to enlighten its readers on racism and ridicule in the 21st Century, years after the monumental Civil Rights movement.

“AAA is a call to action, but more importantly, it seeks to discuss how Blacks treat each other and how to resolve this issue,” Johnson concludes, “the book also features a myriad of ways that Black Americans can empower each other and themselves.”